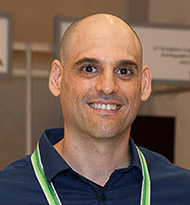 Dr. Oren Lavan is an Associate Professor in the Faculty of Civil and Environmental Engineering at the Technion – Israel Institute of Technology. He received his Ph.D. in Civil Engineering from the Technion in 2006 and was a Visiting Research Scientist (2005-2007) at the Department of Civil, Structural and Environmental Engineering, University at Buffalo – The State University of New York. He spent a sabbatical as a Visiting Associate Professor at the Disaster Prevention Research Institute at Kyoto University (2014). Dr. Lavan teaches and conducts research in structural engineering, structural dynamics, structural optimization, earthquake engineering, structural control and multi-hazard (wind-seismic) analysis and design of tall buildings. Dr. Lavan serves as an associate editor for the Journal of Structural Engineering, ASCE. He is the Israeli national delegate to the International Association for Earthquake Engineering (IAEE). He is a member of the American Society of Civil Engineers (ASCE) where he is a member of several committees. He is also a member of the European Association for Earthquake Engineering (EAEE) where he is a member of the executive committee of TG8 (Seismic behavior of irregular and complex structures). He is also active in Israeli committees of standards.

My group's main research focuses on the design and optimal design of both retrofitting existing civil structures and designing new ones under dynamic loadings. This is often done using advanced technologies (i.e., viscous dampers; TMDs; weakening and damping; and friction/yielding dampers; etc.).

A key goal of structural engineering is increasing the resilience of civil structures in extreme events, limiting their loses and the expected life-cycle-costs (LCC). In low and mid-rise buildings in extreme events, earthquake loads and their effects dominate the LCC. One of my group's major research topics focuses on the optimal seismic design of both retrofitting existing buildings and designing new ones. Emphasis is given on equipping structures with various types of advanced technologies, as well as on optimally designing conventional structures.

Any optimized design is as good as the formulation of the optimization problem it solves. Thus, in contrast to "convenient" formulations, the optimization problems we formulate are guided by reality, as complex as their solutions might be. Then, efforts are made to develop efficient methodologies for their solution. Realistic problems are in line with the Performance-Based Design philosophy where a desired target is chosen (e.g. desired LCC) with minimum initial cost, or within multi-objective optimization frameworks. For that purpose, in a unique manner, nonlinear models are considered and advanced Nonlinear Response History Analyses are performed to evaluate the structural responses (or LCC) under realistic ground motion records. As regular structures exist only in textbooks, emphasis is given to formulating problems that are appropriate for generally irregular systems. Furthermore, relying on sound and advanced theories, the new methodologies developed are computationally efficient and could optimize large-scale realistic structures within minimum time on desktop computers. Our methodologies are considered as leading approaches in several comparative studies of benchmark optimal seismic design solutions and are found to lead to excellent designs.

When it comes to tall buildings, although from the perspective of code requirements either winds or earthquakes may dominate the design, a multi-hazard approach is required, as both may strongly contribute to the LCC. Thus, a pioneering work for the optimal design of passive, semi-active and active TMDs in tall buildings to minimize LCC due to both winds and earthquakes has been pursued.

To support the optimization of complex dynamic systems, the extension of a robust analysis theory (namely, the Mixed Lagrangian Formalism), that is robust in terms of convergence, has been adopted (among other more traditional appruaches). It has been extended to account for large-scale realistic buildings, strength degradation and fracture, gap closing and contact as well as rocking behavior. To enable its use as the analysis tool within a gradient based optimization framework, sensitivities of the responses of interest w.r.t structural parameters have been derived. This enabled, thus far, efficient optimization of novel rocking structures.

Courses continuously taught at the Technion: